January 12, 2017
One of my favorite parts of having a blog is being able to share my story alongside the stories of my clients. When I got engaged I blogged about wedding planning and what it was like to be marrying my high school sweetheart. I have shared about road trips, adopting our dogs, and other pieces of our life whenever I had a chance. I love having a place where I can document life’s sweetest moments. Now I’m ready to share the next chapter…
xxxxxxxxxxxxxxx

For the better part of 2016 I felt like I was keeping a huge secret. Sam and I started trying to have a baby. I thought it would be like turning on a switch. One day you weren’t ready to get pregnant, then the next day you decided it was time, and boom it would happen! Well for me that just wasn’t the case.

I ate healthy, worked out, stopped drinking alcohol and coffee, and I wanted it- isn’t that all that was necessary? Just weeks after stopping birth control I was convinced I was pregnant. The symptoms were there. I was nauseous with really odd cravings, sleepy all the time, and had stomach pains. I HAD TO BE PREGNANT. I was buying groceries for the week and walked by the pharmacy. The pregnancy tests caught my eye. $20?! Oh well, I’m buying two! I didn’t tell my husband (the man I text mid-day updates on what I ate for lunch and cute things our dogs do) because I was all about the surprise. Everything was planned in my head, how I would tell him and then how we would tell our parents a few weeks later… How I needed to reschedule some of my work in November because I would have a newborn at home…

That was my first negative test. It had to be a mistake, or maybe I just took it wrong, or too early? I told myself I could try again tomorrow. I wrapped the test in a napkin and threw away the evidence so I wouldn’t have to share the bad news. But tomorrow’s test was also negative. And the next one. And the next. I must be doing something wrong… I downloaded a cycle-tracking app, and cracked down with more research on getting pregnant. It was then I learned about the affects of birth control on a woman’s body even after she stops taking it. That was the first pang of true fear I felt, what if it takes months to get pregnant? And then, what if I never get pregnant?

It might sound crazy. A 23 year old newlywed so worried about not being able to get pregnant after a month of trying. But that negative test brought up a fear that I think hides inside most women. The endless “what ifs.”

We then found ourselves in 9 long months of waiting, unanswered questions, irregular cycles, and a doctor that wouldn’t advise anything more than patience. Each ovulation and pregnancy test I took came back negative. Something had to be wrong, but I couldn’t’ figure out what it could be. I started to feel like our life was being put on hold and it was completely out of my control. After pleading my case time and time again, I was finally able to get an appointment with an infertility doctor.

It was the weekend before our appointment and I was sure I was about to get a visit from “Aunt Flo” (which would mean I would need to delay the appointment into the next year). Sam told me I should take one last pregnancy test and I refused. I couldn’t handle another negative. But the next morning the pile of unused tests were sitting on the counter and I thought “why not.” I didn’t even look at the test for five minutes; I just continued getting ready and pretending I wasn’t freaking out.  When I finally allowed my eyes to wander toward that tiny screen, there it was! A faint line. It had to be a mistake, right? I remembered all the articles I read about how uncommon false positives were, along with the symptoms I’d been feeling, and it hit me: I’m pregnant!!! I threw open the bathroom door and jumped on top of a sleeping Sam saying “Wake up! There’s two lines! Wake up!!!”

We rushed out the door to buy more tests (three different kinds- just in case!) and two onesies to gift to our parents. Every test was instantly positive. So again we ran out the door to tell our friends (who just told us a week before that they were also pregnant!!), Sam’s parents, and then my parents. We handed them each a gift bag and said “We know what you can be for Halloween next year…” and then they pulled out the onesie, “Grandparents!!” 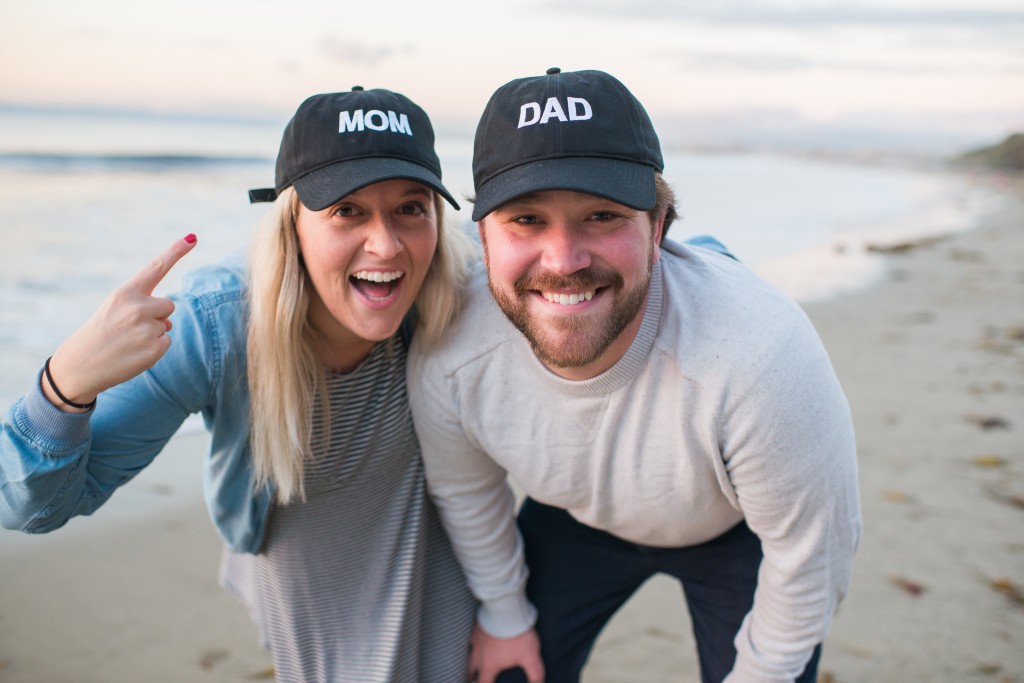 The first few weeks it didn’t seem real. I felt like I had a whole new secret, but this time it was so… comforting. Rewarding, even. We scheduled our first ultrasound and counted down the days until we could finally hear that little heartbeat. Walking in to that office I was so nervous that something was going to go wrong or that the tests were actually negative. My blood pressure was through the roof and I explained to the nurse I was just nervous. So she sent us to the ultrasound room and Sam and I both locked our eyes on the screen. From the moment the probe hit my stomach, we could see a tiny little flicker in the middle of a little bean. “There’s your baby.” And when she asked if we wanted to hear the heart beat, we both nodded wordlessly. It took a second, but then there it was, so strong for only 6 weeks. Sam was so lost in the moment he forgot to take a video and I couldn’t even be mad at him. It was all real. “There’s your baby.”

Every mom in the world is going to hate me for saying this… but the first trimester of pregnancy was so easy for me. There was a week where I was grossed out by all food except bread and I had a temporary love affair with salad… don’t worry, thats definitely over. I’ve felt pretty exhausted (turns out growing a human takes a toll on you!) so I haven’t been able to exercise like I used to. And while I think my emotions have been in check (my husband might disagree), I can’t help but ball at any video of a cute puppy. But other than that I have been SO incredibly lucky. We also lucked out with a doctor that schedules an ultrasound every three weeks and I find myself just as nervous/ giddy/ high-blood-pressure-y at each one.

As I’m writing this (on January 3rd) I am 14 weeks along and due July 4th. We will find out the gender next week, and even though I currently look like I enjoyed a few too many Christmas cookies I’ve been told my belly will ‘pop’ any day now. I hope to blog every couple weeks of my pregnancy with updates, nursery plans, and everything in between. I’m really looking forward to sharing this journey and transitioning into a working MOM <3 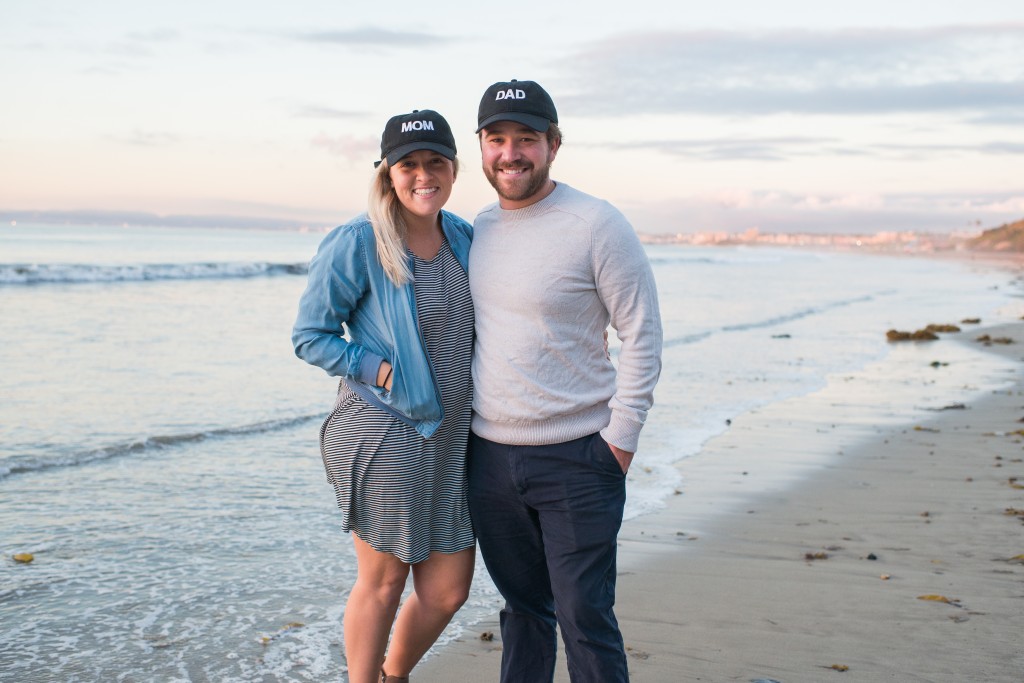 […] you read my first baby diaries post, you know we were planning + trying for this baby for 10 months. In that time I read a lot […]

Jessica, what a beautiful blog post. It touched my heart and had me in tears. Thank goodness I wasn’t wearing any make-up. After trying for 4 months, my husband and I found out we were pregnant w a baby due in June–just a few weeks before yours! We went for our first US at 8 weeks because my husband was leaving for a month long business trip. I remember the same nervous feelings I had. I waited for that flicker of the heart but unfortunately for us there was a baby but no flicker. Although it was extremely tough to move on, hearing stories like yours definitely gives me hope. Congrats and finish strong! Can’t wait to hear more updates ❤

Hannah, I’m so, so sorry. I can’t even imagine what that has been like, but I’m so glad my blog has given you hope. I look forward to seeing a post announcing your rainbow baby <3

If I could leave heart eye emojis in a blog comment, I would leave one million of them. We’re still so happy for you guys and can’t wait to meet baby Hickerson!