Welcome to the Bungalow

On January 1st I wrote a list of goals for the year. One was to be in a new house by 2019. Sam and I didn’t really think it was possible but what did it hurt to dream? We both had the Redfin apps on our phones and checked it periodically just for fun. The local market has been exploding and we just enjoyed watching it from the outside.

In March my mom and I accidentally booked a tour at this super crappy house in a super nice neighborhood (We are major looky-loos!) It was truly awful and we obviously knew it wouldn’t be a good idea to live in that intense of a construction zone with a baby. But then this momentum started… the agent that showed us that house mentioned another crap-tastic place on the other side of town. Sure let’s check it out! It was a little better than the first but once we did the math it would be too high of a mortgage. Suddenly we had a budget, an agent, a list of must haves, and a search for a new house.

A week later we found the perfect house. Priced low-ish for the area, a little closer to the beach, and so beautifully designed that we wouldn’t have to do ANY work. We looked past how difficult it would be to add a bedroom in the future and that we actually wanted a project not a finished house. We wrote an offer with a really good letter (because thats how you do it these days, you write to the owners telling them why their house is the best house out of all the houses). A couple days of chaos and counters and frustration later, we find out that we have been outbid by not one, not two, but three better (much, much higher) offers.

Heartbroken, we have to just move on.

Let me pause quickly to talk about the current Real Estate market in our part of Southern California. In short, ITS FREAKING INSANE. Houses sell in DAYS.

So if this was really our plan to buy a new house, anything we were remotely interested in we would have to make an offer within days of it listing.

Another house pops up about a week later. Its located in Lomita instead of Torrance, which isn’t ideal BUT that means a slightly lower price and bigger property. Its a 1950’s A-frame house with exposed beams and some quirks, but overall a great house that we could put some work into and create something SUPER open-concept and modern. We sit on it for a couple days, decide to make an offer WAY over asking with yet another delightful letter talking about how we would love the house for our family and… get outbid again. This time we came in second place, but in the housing market it really doesn’t matter.

We were completely defeated by this process and decided to take a break from looking until after our family vacation to Hawaii.

But then I get an email from an agent we had been talking to on a Tuesday, the morning before our flight. I said we would need to wait a week to look at it, knowing that it would most likely be sold by the time we returned. He emailed back and asked if I wanted to take a tour an hour later. Heck yes. Sam was at work so my dad and I went to the house and immediately fell in love. The owner was there and told us stories from her 40 years of living there. The house was originally located on the beach in Redondo and moved (?!?) to Torrance in the 50s. And the most fate-ful part was that it was built in 1924- the same year as our cottage. An hour later we were calling Sam saying we just HAD to make an offer.

Fast forward three days with a flight to Hawaii, bad cell service, negotiations, and begging the owner to accept our offer & cancel the open house that upcoming weekend. Every hour we waited for news, I found myself wanting the house more and more. I could completely pictures us living there, what changes and renovations we would make, and even throwing Dylan’s First Birthday party there in a couple months.

By Friday we got the call- our offer was ACCEPTED!!

A little more than 30 days later, with just a couple bumps in the escrow-road, we moved into our new house (and sold our old one!!) Though… I catch myself every time I say “new house” since its actually very old. Original windows on a pulley system, original hardwood floors (that we restored the moment we got the keys), things that are broken and quirky and interesting. Its also SMALLER than our old house. Yep, we took a look at what we truly needed and it certainly wasn’t extra bedrooms or a big fancy kitchen.  What we really need is room to share meals with our friends and family, and a big yard for our babies to run around. And that is exactly what we got.

Maybe someday we will fix the kitchen and paint the very, very green bathroom. If we decide to have more kids there might be a bedroom addition in our future. But for now we are just so thrilled to be home.

Welcome to the place we’ve designated the “happy house;” Welcome to The Bungalow. 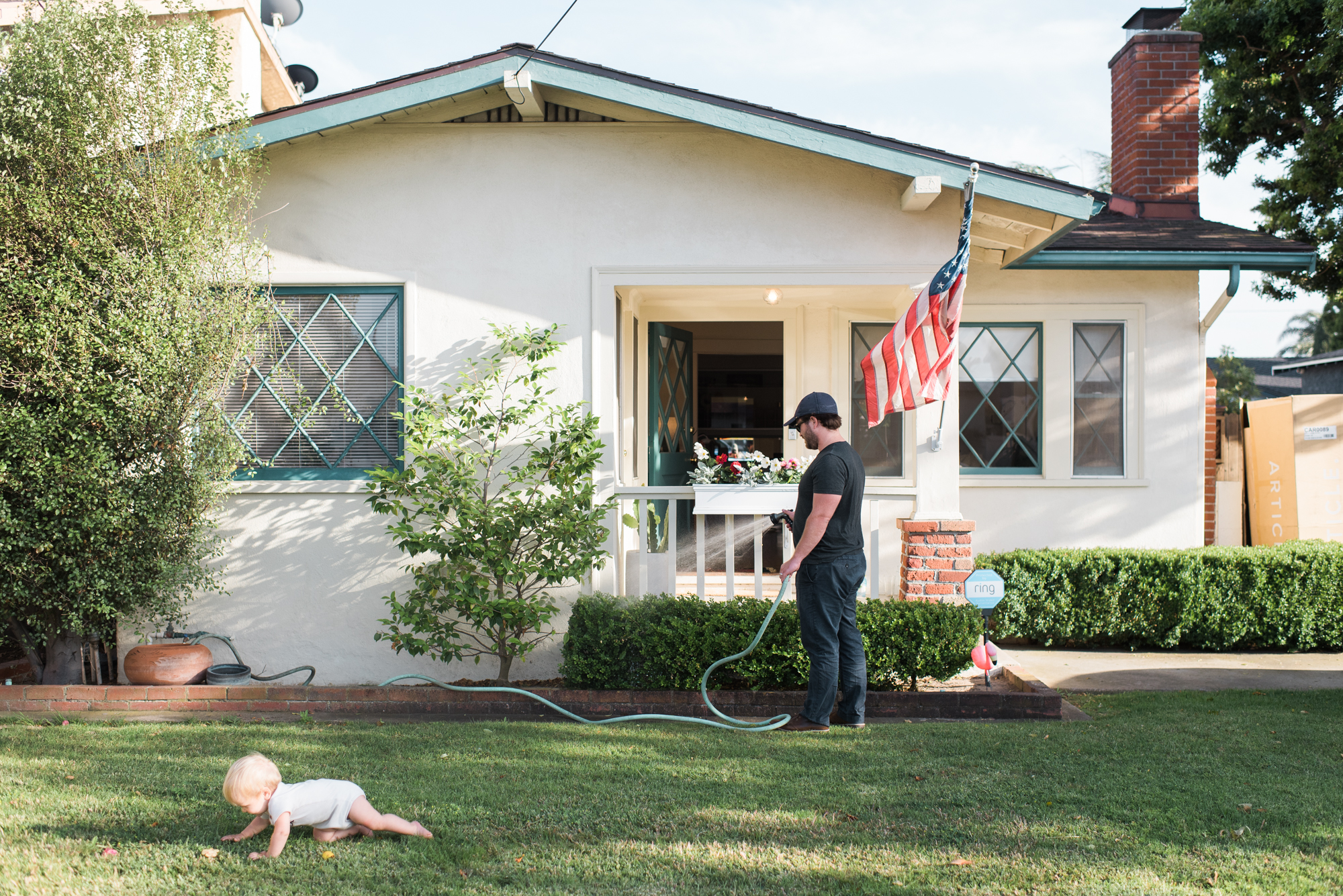 […] Dylan is my tiny bff and I will always cherish these days where its just the two of us at home together. I wanted to take these to remember what it was like on a regular Monday morning in our little bungalow. […]